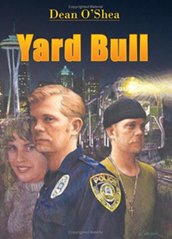 Dean is 24 and newly returned from a controversial war. A cocky, idealistic loner, he's hired as a railroad Special Agent (police officer) in Lincoln, Nebraska.  Cassie is an upbeat, adventurous girl growing up in Seattle with her eccentric, divorced mother. Their home overlooks the sea where she eventually learns to scuba dive and sail.

Dean's first years on the job are a disaster, as he fumbles arrests and drinks himself to sleep every night. After witnessing death on the job, he realizes his life has no meaning and decides to make a drastic change. He transfers to Seattle with his best and only friend, a cockapoo named Snoopy.

When Cassie and Dean finally meet, she’s a dog groomer saving money for a hike up the Chilkoot Pass and he’s a full-fledged detective who can’t get along with his police partner, Henry. Through comic mishaps in both his personal and professional life, Dean learns the truth about friendship and faith.  Yard Bull is a deeply personal memoir about relationships, fast-paced action, and a spiritual journey. This book has been enjoyed by men and women alike.

Available in Hard Cover and Kindle.

On the Mark Publishing